Wilson Gunn’s Senior Partner Mark Goodwin has retired from the partnership after 34 years with the firm. He will continue to support the firm as a consultant.

Mark joined Wilson Gunn & Ellis (as the firm was then known) in April 1988 as the firm’s first graduate trainee having obtained a degree in chemistry from the University of Salford. He went on to qualify as a patent and trade mark attorney in 1992 and became a partner of the firm in 1994.

Over the years, Mark has assisted individual inventors, growing businesses and global organisations to protect their inventions and brands. He has repeatedly been recognised in the top legal directories for his extensive experience, commercial approach, and ability to ‘speak the client’s language’.

Outside of Wilson Gunn, Mark was a former Chair of the North West Group of the Licensing Executives Society (Britain & Ireland). He also contributed to the text European Patents Sourcefinder and tutored on the Robert Schuman University of Strasbourg training course for European Patent Attorneys.

In 1996, Mark experienced one of the most significant events in the firm’s history after the IRA bombing in Manchester wrecked the firm’s then offices in the Royal Exchange. It took two and a half years until the team were able to return to the offices but despite this, not a single case was lost and the firm continued to thrive. 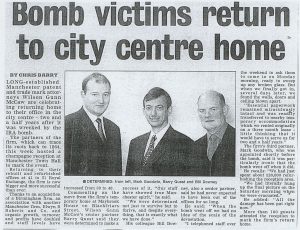 Since becoming the firm’s senior partner in 2009, Mark has overseen the strategic management and operations of the firm.

James Robey, Partner, at Wilson Gunn said “We would like to thank Mark for his time at the helm of Wilson Gunn. As a partnership that has been around for over 150 years, Wilson Gunn is only something you become a temporary custodian of and Mark has taken good care of the firm in his time, leaving a legacy to be proud of. We wish him a long and healthy retirement.”

The Unified Patent Court start date has been delayed by two months.