The changing profile of users of the UK patent system

What are the biggest influences changing the profile of users of the UK patent system?

On 9 August 2021, the UK Intellectual Property Office (UKIPO) published a report on “The changing profile of users of the UK patent system” providing an analysis of the trends in patent applications to the UKIPO between 2000 and 2020 and compared the findings to patent application trends at the European Patent Office (EPO). 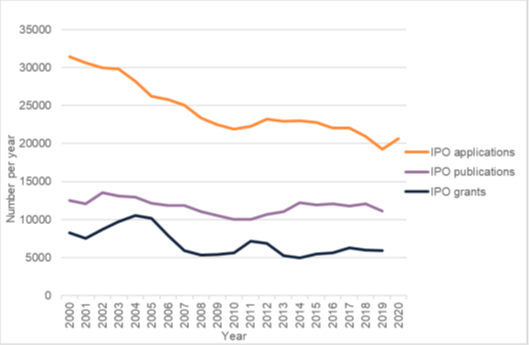 The number of applications to the UKIPO declined significantly between 2000 and 2020, with a drop of 34%, however this slowed between 2010 and 2020, only dropping by 6%. The annual number of publications and patents granted by the UKIPO has remained fairly stable during this twenty-year period. This suggests that a significant component of the drop in total application numbers resulted from applicants who would not have chosen to proceed to publication or to grant. The publication and grant data suggests that there is a consistent, underlying demand for patent protection, which has remained relatively unchanged between 2000 and 2020. 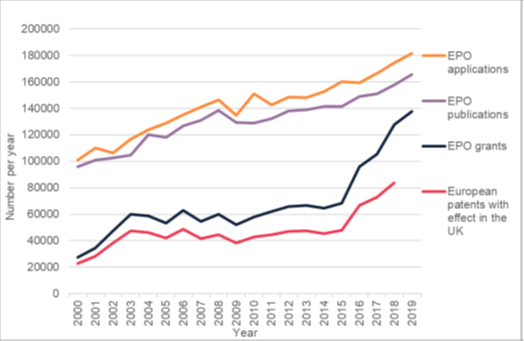 The number of applications to the EPO have increased consistently between 2000 and 2019 and are currently almost ten times greater than at the UKIPO. More than 90% of EPO applications are also published, showing that in most cases applicants choose to proceed with their EPO applications. The higher fees at the EPO mean an applicant is less likely to apply simply to obtain a search. Notably, the number of granted patents doubled from 2015 to 2019, coinciding with the EPO’s “Early Certainty from Search” scheme, announced in 2014. The intention of the EPO’s early certainty scheme is to deliver all search reports to applicants within six months of the filing of their application at the EPO.

The majority of patents in force in the UK are European patents, with 91% of all UK patents in force being European-based, and 93% of all patents entering into force in 2018 being European-based. As growth in the number of granted European patents since 2015 appears to be linked to the EPO’s early certainty scheme, the percentage of UK patents which are European is likely to increase further still.

International Patent Cooperation Treaty (PCT) applications designated in the UK provide a small but fairly consistent input to the UKIPO and are also more likely to reach grant.

The 2008 recession appears to have had the biggest influence on applicant behaviour; around this period, there was a significant turnover of applicants. Early indications suggest that Brexit and COVID-19 appear to have affected applicant behaviour, but there have been no fundamental changes to the patent system due to Brexit, in particular because the European Patent Convention is independent of the EU and the UK’s status is unaffected. Internal targets at the UKIPO and EPO have impacted the number of patents granted and in force, but don’t appear to influence applicant behaviour.

One-off and small portfolio applicants at the UKIPO are more likely to be individuals rather than registered businesses. Their applications are also much less likely to be published or granted. The annual number of this application type has steadily decreased, with no clear link to external events, such as the 2008 recession, which would be more likely to impact the behaviour of business applicants. Against this decreasing trend, the applicants within this category who were in fact businesses (rather than individuals) maintained a steady number of annual applications over this period.

Domestic UK-based use of the EPO has also increased, but portfolio analysis doesn’t suggest a direct shift of applicants using the UKIPO to the EPO is common. Evidence suggests that there may be a shift in specific technology areas, and feedback from UKIPO customers sometimes criticises UK practice in relation to computer program inventions. The UKIPO remains attractive due to its low fees. Pre-grant fees at the UKIPO are £310, compared with €4750 at the EPO. The UKIPO was also an attractive option in the past because of its speed, but this might be changing with the effects of the EPOs Early Certainty scheme.

The biggest technical fields filed in at the UKIPO are Civil Engineering, Computer Technology, Transport, Measurement, and Electrical Machinery/Apparatus/Energy. Annual application numbers have fallen for Telecommunications, Furniture, Games and Audio-Visual Technology. This decline is also shared to an extent at the EPO, despite the overall trend of strong application number growth at the EPO.

The decline in applications to the UKIPO over the last twenty years arises out of a complex mixture of components. As identified above, each of these components include different patterns, and so a continued future downward trend in use of the UKIPO would not be expected based on these factors.

Patents may be filed with either the UKIPO or the EPO, and the two are not necessarily exclusive, as an EPO-based patent application may draw priority from an initial UKIPO-based application, and an EPO-based application also offers protection within the UK if desired. There are advantages and disadvantages associated with each approach, and the ideal filing office is often circumstantial. UKIPO patent applications offer lower-cost initial searching services and EPO applications offer broader territorial protection across Europe while providing centralised patent examination for each territory.

Patent protection can be used to prevent competing companies from making, selling, importing, using and keeping (for later use) a patent protected product. Patents act to prevent the use of patent protected processes. Patents also offer protection against indirect infringement for both UKIPO-based and EPO-based patents. By acting as barriers to entry, patents prevent competitors from selling equivalent products and undercutting your prices, thereby providing you with a strong competitive advantage in the market. Patents level the playing field against larger companies who may otherwise have better access to funding, marketing relationships, distribution channels and expertise. The protection of a patent means that all firms need to first reach an agreement with the patent holder before they may use the patented technology.

If you have questions about intellectual property or patent protection in general, please get in touch to speak to one of our patent attorneys.