Science, technology and weapons – the inventions of the 1860s

The eighteen sixties were a turbulent decade with a number of political and social upheavals in Europe and the United States, with the American civil war from 1861 – 1865 and the French occupation of Mexico. You could be mistaken for believing that this decade was riddled with war and strife but it also brought forward many significant literary achievements including Tolstoy’s War and Peace, Lewis Carroll’s Alice in Wonderland and Jules Verne’s 20,000 Leagues Under the Sea.

With all these social and political developments there were also a number of significant developments in science and technology that coloured the decade.

The 1860s brought us a number of important scientific developments that, whilst not as world changing as earlier or later decades, would still prove to be of massive significance to later scientific research.

Despite the existence of a number of precursors, in 1869 Dimitri Mendeleev is credited with the publication of the first incarnation of the periodic table of elements. Developed to display the trends within known elements of the time, Mendeleev predicted the discovery of a number of new elements and their potential relationship within his periodic table. He would later be proven right with the discovery of Ga (gallium) and Ge (germanium). 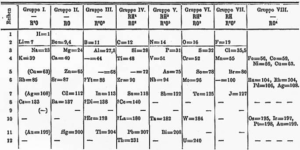 In 1866 an Austrian monk named Gregor Mendel published the findings of his years of research cultivating and testing over 5000 pea plants. He concluded with two theories that would later be known as Mendel’s Principles of Heredity and, although it was initially given little credence, it was later accepted as one of the most prominent and controversial theories of genetics.

In 1867 Alfred Nobel first patented his mixture of nitro-glycerine and Diatomaceous earth, which would come to be known as Dynamite – the first safely manageable explosive that was stronger than black powder. Nobel, a Swedish engineer, invented dynamite as a safer way to blast rock to ease in the construction of bridges and buildings and after its introduction, dynamite rapidly gained wide-scale use as a safe alternative to gunpowder and nitro-glycerine.

The 1860’s were a time of conflict. With wars being fought around the world there were a number of major developments in weapons.

In 1863 the first submarine, that wasn’t propelled by human power, was launched in the form of the French-made Plongeur, which was driven using compressed air.

Whilst not initially intended to be used as a war machine the submarine would become a viable weapon in 1866 when Robert Whitehead perfected an earlier design for a self-propelled torpedo. The torpedo would be called the Whitehead torpedo also propelled by compressed air and carrying an explosive warhead it could move at a speed of 7 knots (about 8mph) and was accurate up 700 yards.

One of the most recognised weapons to be developed in the 1860s was the Gatling gun designed by American inventor Dr. Richard J. Gatling in 1861 and patented in 1865. It was designed to reduce the numbers of men needed for war and hopefully reduce the number of deaths in war. The Gatling gun fired continuously but was powered by a crank and not the first true automatic weapon, but still a massive development in firearms technology that would first see deployment during the American civil war. 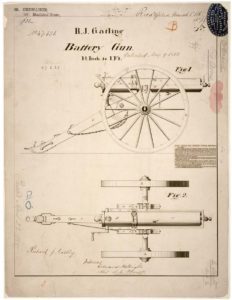 The 1860s were not just all about war. A number of other inventions can be credited to the decade and amongst them is the first traffic light system. The first traffic light was installed outside the Houses of Parliament. Created by railway engineer J.P. Knight, these lights were lit by gas and required a police officer to operate them. The lights would be successful at controlling traffic but a gas explosion in 1869 lead to doubts about the safety of the lights and the project was abandoned.

When we opened our doors in 1864 Manchester was benefiting from a booming textiles industry with textile mills at Shudehill and Brunswick Mill in Ancoats. These mills’ continued growth was bolstered by developments in manufacturing processes including improvements on Cartwright’s power loom, the Jacquard Loom and the creation of synthetic dyes.

The only United States President to own a patent

Interestingly, the 1860s brought us the only United States President to own a patent.  Abraham Lincoln became president in 1864 and owned a patent issued in 1849 for a device to lift boats over shoals and other river obstructions.

As we can see the 1860s was an innovative decade and when we opened in 1864 we would have had plenty of inventions to work with ourselves, helping us to grow for 150 years into the firm we are today.

Let us know your thoughts

Which of these inventions do you think was the most significant? Contact us today.