The EU General Court denied Pirelli’s attempt to trade mark the curved strips on their tyres.

Pirelli, the Italian tyre manufacturer, has failed to gain any traction in its attempts to register the curved strips on its tyres as a European trade mark.

The European Union General Court ruled that the curved strips, which appear on Pirelli’s tyres in the same position but in various colours, could not be afforded trade mark protection because it had not acquired distinctiveness through use. 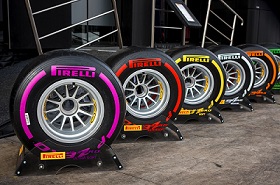 Pirelli first applied to register the trade mark in October 2014. In the application, the mark was described as: ‘A pair of essentially equal curved strips positioned on the side of a tyre and running along its circumference. The trade mark in question is a ‘position mark.’ Protection was sought in Class 12, specifically for tyres, rims and covers for vehicle wheels.

The examiner refused the application ‘on the ground that the trade mark sought was devoid of any distinctive character for the goods referred to’.

Pirelli appealed to the First Board of Appeal of EUIPO who dismissed the appeal before it was then brought before the EU General Court.

The EU General Court has now also dismissed the action. In line with the Board of Appeal, who considered that the mark was ‘too simple to be remembered’, the Court found that the mark was extremely simple and could not easily or immediately help the relevant public to identify the origin of the goods.

Pirelli had claimed that the relevant public’s level of attention to the purchase of these goods, and therefore the mark, was particularly high, because these goods are not purchased regularly; require a certain financial investment; and must be compatible with goods already possessed, including for safety reasons. The Court disagreed and dismissed this entire argument as irrelevant, because, regardless of the public’s level of attention, the mark is so simple that it would not enable the public to identify the tyre as a Pirelli tyre.

The Court’s decision also found that Pirelli did not provide sufficient evidence to show that the mark had acquired distinctive character.

In practice, this decision reiterates the stance taken by EUIPO on most cases involving ‘position marks’ and trade marks consisting of basic shapes being applied to products.  The stance appears to be that EUIPO will only accept such marks for registration if the mark itself is noticeably and very much out-of-the-ordinary compared to the other marks and shapes that are used as decoration in similar contexts.  If this is not the case then a substantial amount of evidence demonstrating prolonged and high level use across the EU will need to be submitted to see the mark through to registration.

If you have a candidate ‘position mark’ or a trade mark consisting of a basic shape being applied to products, then please feel free to contact us with an example of the candidate mark in question so that we may give you some initial advice on the registrability of the mark, at no cost to you.