Should I use my UK patent as a basis for obtaining a Hong Kong patent?

A new Hong Kong patent system was launched on 19 December 2019.

A new Hong Kong patent system was launched on 19 December 2019 which provides for so called original grant patents (OGP). Under this system an applicant files an application directly with the Hong Kong Patents Registry with the specification in either English or Chinese.

The OGP system will then operate in a manner which is very similar to the Chinese system under which examination must be requested, the application will be examined (initially by the Chinese National Intellectual Property Administration (CNIPA), as an interim arrangement) and will be granted if the examination requirements are satisfied.

The OGP system will operate in parallel with the older re-registration route. So there now is a choice between both routes for obtaining patent protection in Hong Kong. In many cases the existing re-registration system will satisfactorily serve applicants who will be seeking protection in China or the UK in any event, but filing directly in Hong Kong under the OGP system may provide maximum flexibility (but potentially at an increased cost).

However, perhaps the bigger issue is: should an applicant apply for a Hong Kong patent? What are the benefits of doing so and are there any advantages to securing a Hong Kong patent that may not be immediately apparent to a casual observer?

In our view, the answer to all of the above questions is a resounding: Yes!

Firstly, it must be remembered that the patent system in China is relatively young compared to the patent systems in most of the largest economies in the world.  The first patent legislation commenced in 1984.  In 1985, China acceded to the Paris Convention and then acceded to the Patent Cooperation Treaty in 1994.  China became a member of the TRIPS agreement in 2001 when it joined the World Trade Organisation.

Although the consensus view of China’s enforcement of IP rights has improved or stayed the same over the last five years, the system is far from being user friendly, particularly from the point of view of foreign applicants.

As the following graphic shows, the most important challenges identified by companies in China are identified as difficulty prosecuting IP infringements in court or via administrative measures, and insufficient protection offered by text of IP-related laws and regulations.

Many were also concerned about IP theft by employees, cyber-theft and licensing constraints. 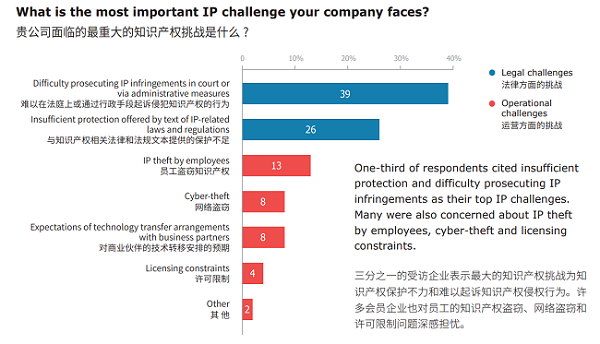 Given these difficulties and the uncertainty of the Chinese system, a Hong Kong patent can provide the key to a strategy regarding enforcement of patent protection in relation to China.

In addition, many Chinese companies now have core financial and/or sale operations in Hong Kong, mainly due to Hong Kong’s position in the past.

Hong Kong has a strong rule of law and an independent judiciary.  Many professionals are located in Hong Kong with international experience in gaining and enforcing patent protection.

Further, intellectual property rights disputes can be resolved by arbitration in Hong Kong, something which is very unusual in China.

Lastly and possible most importantly, there are specific arrangements in place for reciprocal enforcement of arbitral awards and civil judgments in Hong Kong and China.

So, all things considered, if China is an important market, patent applicants should give serious thought to obtaining a Hong Kong patent as well as (or instead of) a Chinese patent in order to take advantage of the unique position in which Hong Kong finds itself.

If you would like advice on seeking patent protection, please get in touch to speak to one of our experts.

A recent patent granted to Microsoft describes an invention which emulates talking to the deceased.

Medical treatment patent prohibition has teeth at the EPO

A European patent has been revoked after a recent decision by the EPO Boards of Appeal.

Can the EPO Boards of Appeal review findings of fact?

A recent patent decision has changed how far the EPO Boards of Appeal reviews findings of fact.