The Advocate General (AG) has now provided his opinion in relation to a question referred to the Court of Justice of the European Union in the ongoing trade mark dispute between Mr Louboutin and Christian Louboutin (together referred to as ‘Louboutin’) and the Dutch shoe retailer, Van Haren Schoenen BV (‘Van Haren’).

Louboutin have a Benelux trade mark registered for the colour red (Pantone 18 1663TP) applied to the sole of high heeled shoes (other than orthopaedic shoes).  Louboutin initiated proceedings (with the District Court of the Hague, Netherlands) in 2009, seeking a decision (that they obtained) that their trade mark was infringed by Van Haren’s sale of high-heeled woman’s shoes that comprise red soles. 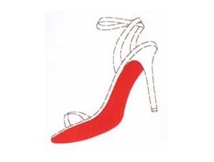 This judgment was contested by Van Haren on the basis that Louboutin’s mark was invalid because “the contested mark is in fact a two-dimensional mark, more specifically the colour red which, when applied to the soles of shoes, conforms to the shape of the shoes and gives them substantial value.”

Opinion of the Advocate General (AG)

The AG sets out that whilst trade marks, on the one hand, constitute an indispensable part of competition which EU law seeks to establish and maintain, they also provide their owner with a monopoly to use the registered mark for an unlimited period. Whilst in most cases these two factors do not conflict, that is not so in relation to signs which are indissociable from the appearance of the goods. The registration of such a sign as a trade mark may limit the ability of others to bring competing products onto the market.  Article 3(1)(e) of Directive 2008/95 is intended to prevent the registration of this type of trade mark, it specifically states that registered marks shall be liable to be declared invalid if they consist exclusively of “the shape that gives substantial value to the goods”.

The AG notes that the referring court has pointed out that signs consisting of colours per se, in principle, give rise to the same objections with regard to the risk of practical characteristics of goods being monopolised; in this regard the need for a specific approach was recognised in the Libertel case.

These two categories of signs, those consisting of the shape of the goods and those consisting of a colour per se, are subject to specific provisions within the scheme of Directive 2008/95, as interpreted by the Court. It is therefore necessary, before the referring court’s question can be answered, to determine which of those two categories the contested sign belongs to.

The AG states that in respect of the contested mark, the referring court must make an assessment as to the classification of the mark concerned by identifying the essential characteristics of the mark, to determine whether the mark at issue is a colour mark per se or a mark consisting of the shape of the goods, but also seeking protection for a colour. The AG indicates that to make this determination, the referring court should carry out an overall assessment, taking into account the graphic representation and any descriptions filed at the time of application for registration, as well as other material relevant to identifying the essential characteristics of the contested mark.

The AG suggests that a mark consisting of a colour mark per se would not fall within the scope of Article 3(1)(e) of Directive 2008/95. The AG makes a series of observations regarding the contested mark noting that:

ii) on the other hand, it is necessary to consider whether the mark seeks protection for a certain colour per se that is not spatially delimited, or whether protection is sought in conjunction with other characteristics that relate to the shape of the goods

iv) the fact that the proprietor of the mark does not claim protection for the contours of the goods is not decisive; the proprietors leave themselves free to change the shape of the soles from model to model

v) what must be determined is whether the sign derives its distinctive character from the colour in respect of which protection is sought per se, or from the exact positioning of that colour in relation to other elements of the shape of the goods

vi) the AG states that while it will ultimately be for the referring court to apply these considerations, that several factual matters which are apparent from the order for reference, point to the conclusion that the mark at issue is better conceptualised as a mark consisting of the shape of the goods and seeking to protect a certain colour in relation to that shape.

The AG ultimately concludes that the Louboutin mark should be equated as being one that consists of the shape of the goods and seeking protection for a colour in relation to that shape, rather than consisting of a colour mark per se.

The AG’s answer to the question that was referred by the District Court of The Hague is that Article 3(1)(e)(iii) of Directive 2008/95/EC should be interpreted as being capable of applying to a sign consisting of the shape of a product and seeking protection for a certain colour. This is bad news for Louboutin, in that if their mark is deemed to consist of a red colour on the sole of a shoe and the sole is deemed to comprise the shape of the product, then their mark would potentially be caught by the prohibition contained in Article 3(1)(e)(iii).

The AG’s opinon is not binding on the CJEU and so it will be interesting to see if the CJEU comes to the same conclusion.

If you have any questions about colour trade marks, please get in touch with one of our trade mark attorneys.