The EU general court ruled that the mark was contrary to public policy.

The EU General Court has ruled that a Spanish restaurant chain called “La Mafia” cannot register their name as a trade mark because it is contrary to public policy and trivialises the serious harm done by the Italian criminal organisation.

In 2006, Spanish company La Mafia Franchises filed an application for a figurative trade mark (shown below) in three classes, including Class 43 “services for providing food and drink”. The trade mark was published and registered the following year. 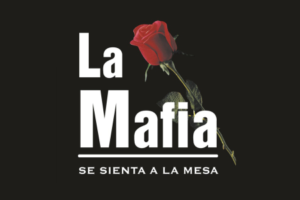 In 2015, the Italian Republic filed an application with the EUIPO to declare the mark invalid on the basis that the mark was ‘contrary to public policy and to accepted principles of morality, since the word element ‘Mafia’ referred to a criminal organisation’.

The Cancellation Division upheld the application for a declaration of invalidity. La Mafia Franchises appealed against the decision but in October 2016 the First Board of Appeal of the EUIPO dismissed the appeal, confirming that the contested mark was contrary to public policy. The Board of Appeal held that the mark ‘manifestly promoted the criminal organisation known as the Mafia’ and that the word elements of the mark conveyed a message of conviviality and trivialised the word element ‘Mafia’.

The General Court found that the Board of Appeal was correct in finding that the mark was contrary to public policy and dismissed the case.

At the outset, the Court explains that marks which may be contrary to public policy or accepted principles of morality must be assessed based on the standards of a reasonable person with average sensitivity and tolerance thresholds. The examination should also consider those who will encounter the sign incidentally in their day-to-day lives, not just the public to which the goods and services designated by the sign are addressed.

The Court also points out that it is necessary to consider both the circumstances common to Member States of the European Union as a whole, and of the particular circumstances of individual states who may perceive signs differently for linguistic, historical, social and cultural reasons.

The Court begins by highlighting that the word element ‘la Mafia’ is the dominant element in the contested mark , and that this brings to mind, for the relevant public, the name of a criminal organisation responsible for particularly serious breaches of public policy.

They state that ‘la Mafia’ is understood world-wide as referring to a criminal organisation that resorts to intimidation, physical violence and murder in carrying out its activities, which include drug and arms trafficking, money laundering and corruption. This criminal activity undertaken by the Mafia is viewed by the Court to breach the very values on which the European Union is founded.

The word element ‘la Mafia’ also is known to have deeply negative connotations in Italy, on account of the serious harm done by that criminal organisation to the security of that Member State.

The Court rejected the applicant’s argument that the purpose of the registration of the contested mark is not to shock or offend, but only to allude to the Godfather film series. The Court said this was irrelevant to the negative perception of the mark by the relevant public.

Similarly, the fact that there are many books and films on the subject of the Mafia in no way alters the perception of the harm done by that organisation.

Finally, the Court finds that the other elements that the association of ‘la Mafia’ with the other elements of the contested mark convey a globally positive image of the Mafia’s activities and trivialise the perception of the criminal activities of that organisation. For example, the red rose may be perceived as a symbol for love or harmony rather than the violence of the Mafia; and “se sienta a la mesa” which translates as “takes a seat at the table” may be thought to refer to the idea of sharing a meal.

This ruling is not all that surprising and not out of line with the approach previously taken by the EU General Court or the EU Intellectual Property Office (EUIPO).

There have been a number of decided cases in the UK involving marks, the registration of which would be contrary to public policy or to accepted principles of morality.  Marks that, on appeal, were refused on these grounds included HALLELUJAH, JESUS and TINY PENIS.  The one UK case which is on a par with the “La Mafia” decision involved a figurative mark featuring the words INTER CITY FIRM, which had been the name of a violent group of football fans of West Ham United.  It was refused on the grounds that it would be seen as promoting football hooliganism, or in the words of the Registrar:

“Such a sign falls within a category of marks that may be described as “anti-social branding”.

Furthermore, the mark comprises a display which is potentially threatening to others and likely to cause alarm or distress. Given renewed interest in groups such as the Inter City Firm it is against public policy to register a mark which might be interpreted as glorifying or promoting their exploits.”

Marks likely to fall foul of public policy or accepted principles of morality are those having a religious connotation, those relating to or involving sexuality or innuendo, those consisting of racial epithets or profane matter, and those glorifying or promoting anti-social or illegal activity.

If you have any questions about trade mark protection, please get in touch with our of our trade mark attorneys.

Please register for our webinar on 16th February.