How patents reflect the climate

With the recent COP26 in Glasgow ending on 13 November, we consider how intellectual property will be effected.

The Paris Agreement was a result of COP21 which took place in Paris in 2015. At that time and for the first time ever, every country agreed to work together to limit global warming to well below 2°C and aim for 1.5 °C, to adapt to the impacts of a changing climate and to make money available to deliver on these aims.

As a result, the United Nations projects greenhouse gas emissions will be around 5 billion tonnes lower by 2030 – equivalent to more than ten years of current UK emissions. This graph from the COP26: THE GLASGOW CLIMATE PACT, shows the scope of changes required in terms of annual emissions: 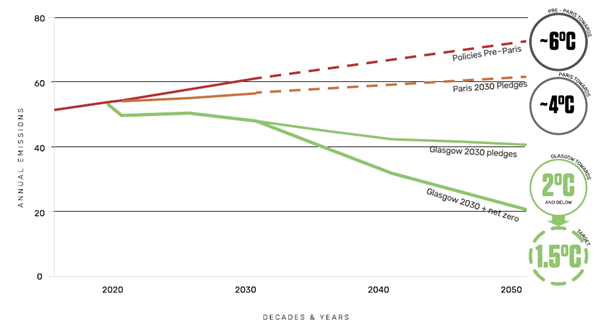 The Glasgow Climate Pact keeps the 1.5°C within reach if countries take concerted and immediate action in four key areas identified as phasing down coal power, halting and reversing deforestation, speeding up the switch to electric vehicles and reducing methane emissions.

The changes to these areas should lead to an increase in opportunities for new technologies to replace those currently used.  The question could be asked though, are commitments such as these made by governments empty words, or does patent data support the contention that the commitments lead to actual new technologies being developed?

The European Patent Office published a report in April 2021 on trends in low-carbon energy (LCE) innovation. The report used new approaches to identify patents related to fossil fuel technologies based on measuring numbers of international patent families (IPF) which the report defines as including patent applications targeting at least two countries.

There was a slump in patenting activity around 2015 and lasting 2-3 years, but following that, there has now been three years of growth in low carbon energy patenting in many key technologies as the following graphic shows. 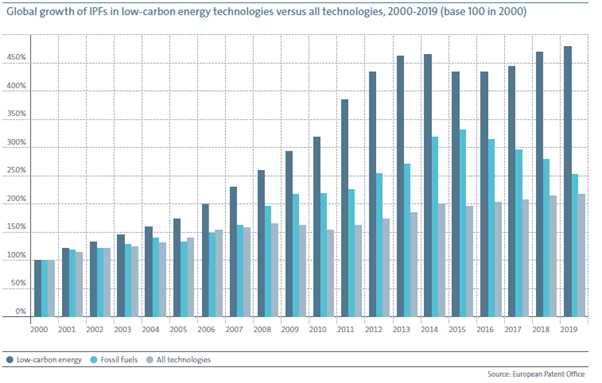 Also of some interest is that the data shows that Europe, Japan and the US dominate the global LCE innovation landscape.  These three together account for more than three quarters of all IPFs generated from 2000 to 2019. 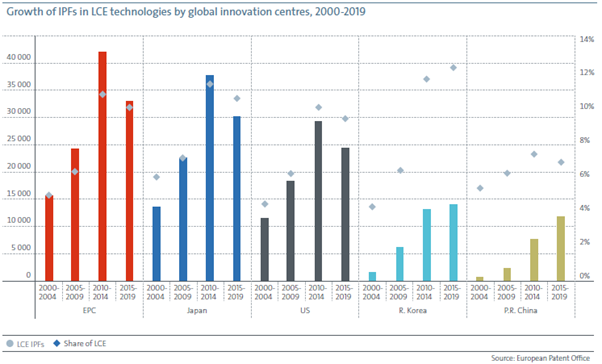 It must be stressed that the numbers above relate to international patent families which the report defines as including patent applications targeting at least two countries.  It also does not attempt to give a view on the relationship between the number of IPFs and the implementation of the technologies in the low carbon emission IPFs.

The trends in the patent data, whilst they may be a lead indicator of the shift away from fossil fuels and toward low carbon emission technologies, do not, in themselves establish that society is moving in that direction, only that the patent filing trend has moved in that direction.

It is, therefore, a brighter sign that the patenting trend has moved toward low carbon emission technologies and we can only hope that patent trends continue to manifest in a paradigm shift toward low carbon emission technologies, particularly their implementation and uptake by society at large. If we are to achieve the aims agreed as the outcomes of the COP26 summit, then that implementation and uptake, together with continued innovation in the low carbon energy space, is essential.

Alternatively, please contact us and we can advise further.

Changes to UK divisional applications will take place from 1 May 2023.