The famous graffiti artist’s trade mark was cancelled on the grounds that it was filed in bad faith.

The Cancellation Division of the European Union Intellectual Property Office (EUIPO) has declared an EU trade mark (EUTM) registration for artist Banksy’s famous ‘Flower Thrower’ artwork invalid on the grounds that it was filed in bad faith.

The ‘Flower Thrower’ is a piece of graffiti by the anonymous street-artist Banksy, which first appeared on the side of a garage in Jerusalem.

In 2014, Pest Control Office Limited, the corporate body understood to be acting on behalf of Banksy, registered the figurative ‘Flower Thrower’ mark (shown below) as an EUTM for a range of goods and services: 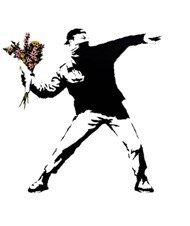 In 2019, Full Colour Black Limited, a company selling greetings cards featuring graffiti and street art, filed an application to invalidate the mark on the grounds it was filed in bad faith.

What is bad faith?

In its decision, the EUIPO provides a relatively neat definition of the intricacies of bad faith:

There is no precise legal definition of the term ‘bad faith’, which is open to various interpretations. Bad faith is a subjective state based on the applicant’s intentions when filing a European Union trade mark. As a general rule, intentions on their own are not subject to legal consequences. For a finding of bad faith there must be, first, some action by the EUTM proprietor which clearly reflects a dishonest intention and, second, an objective standard against which such action can be measured and subsequently qualified as constituting bad faith. There is bad faith when the conduct of the applicant for a European Union trade mark departs from accepted principles of ethical behaviour or honest commercial and business practices, which can be identified by assessing the objective facts of each case against the standards (Opinion of Advocate General Sharpston of 12/03/2009, C-529/07, Lindt Goldhase, EU:C:2009:361, § 60).

However, the matter is not completely settled:

In Sky v Skykick (Case C 371/18), a recent landmark trade mark case, it was noted that bad faith may apply where the applicant never had any intention to use the trade mark and ‘if the applicant had the intention either of undermining, in a manner inconsistent with third parties, or of obtaining…an exclusive right for purposes other than those falling within the functions of a trade mark’.

Whereas is the decision in NEUSCHWANSTEIN (Case C-488/16 P), it was held that a party is not acting in bad faith if that party registers a trade mark in pursuit of a legitimate objective to prevent another party from taking advantage by copying the sign (seemingly irrespective of any intention to use the trade mark).

The EUIPO found that Pest Control Office had filed the mark in ‘bad faith’ because they did not have any intention of using the sign as a trade mark to commercialise goods or provide services.

There was no evidence that Pest Control Office (or Banksy) had ever marketed or sold any goods under the contested sign until after the declaration for invalidity was filed.

It was only then, in October 2019, that Banksy opened a shop called ‘Gross Domestic Product’. The shop was not open to the public, but the public could look at the window displays and buy the products online. Banksy was publicly attributed as explaining that ‘the motivation behind the venture was “possibly the least poetic reason to even make some art” – a trade mark dispute’.

The public statement only served to make it clear to the EUIPO that this was not genuine use of the trade mark, but him ‘merely trying to fulfil the trade mark class categories to show use for these goods to circumvent the non-use of the sign requirement under EU law’.

The EUIPO also considered Banksy’s copyright. Copyright is an automatic right which most artists rely upon to prevent their work being reproduced without their authorisation.  It lasts for the life of the author plus 70 years, whereas trade mark protection lasts forever (provided the registration is valid through use of the trade mark).  However, it would be difficult for Banksy to enforce his copyright without revealing his identity. The EUTM registration was therefore an attempt for Banksy to have legal rights over the Flower Thrower sign as he could not rely on copyright, but the court ruled that this ‘is not a function of a trade mark’.

From the point of view of defining bad faith actions in trade mark law, the present decision seems to encompass a very wide definition of the concept of bad faith, but this might be due to an attempt to rationalise the different legal precedents relied upon by the parties (Sky v Skykick and NEUSCHWANSTEIN).

From a practical perspective, over and above any definition of bad faith, the following take home points may be drawn from the decision: