Back to IP insights
Patents

A guide to patent opposition and appeal procedure at the European Patent Office.

Central oppositions against European Patents are a popular way to try and remove a potential block to being able to manufacture, import or sell products in Europe.

Although at first glance the central opposition procedure before the European Patent Office (EPO) may seem daunting, the procedure itself is relatively simple, and also relatively cost-effective compared to trying to revoke patents in individual European countries.

What are the advantages of centrally opposing a European Patent at the EPO?

If you are successful, an EPO opposition will revoke a European Patent in all countries covered by the patent.

A central opposition at the EPO is also relatively inexpensive compared to the alternative – individual revocation proceedings before the courts of each relevant country. The cost savings in some cases can be in the order of six or even seven figures.

Even if you are not successful with a European Patent opposition, this won’t stop you from filing revocation actions before a court in any relevant European country.

If you are not successful in fully revoking the European Patent but do manage to limit the scope of the patent claims, in many cases this can be just as good as a full revocation, and allow you to manufacture, import or sell your products.

European Patent oppositions can be filed anonymously, and so the patent owner may never know if you are worried about the opposed patent.

Opposition procedure at the EPO

Who can oppose the grant of a European Patent?

Almost anyone may oppose the grant of a European Patent. The only definite ban is the patent owner opposing its own patent.

When can a European Patent be opposed?

Central opposition at the before the European Patent Office is only possible within a 9-month period from the publication of the grant of the patent.

After this period, the patent can only be challenged before national courts on a country-by-country basis in the countries the patent is in force. This is much more expensive than opposing it centrally at the EPO.

What needs to be filed with an opposition?

All of the arguments and supporting documentation should be provided on filing. Not doing so could result in documents filed later not being accepted into the opposition proceedings.

The official fee (€815) must also be paid on filing, otherwise the opposition will be treated as if it had never been filed.

What grounds can you use to challenge the grant of a European Patent during an opposition?

A European Patent can be opposed on a number of grounds:

What processes are followed during an opposition?

Once an opposition is filed, the patent owner is informed and invited to respond to the arguments. A deadline of 4 months is usually set. This response may also include amendments to the claims of the patent, and, if necessary, one or more further sets of ‘auxiliary’ claims in case the EPO deems the primary set of claims (or ‘main request’) not to be allowable for any reason. A copy of the response is also sent to the opponent(s).

Normally one or both parties request an in-person hearing (called ‘oral proceedings’), with its submissions.

What happens during oral proceedings?

Any submissions filed after this deadline may not be admitted into the proceedings, although the EPO has the discretion to admit them. However, in practice, the EPO will only admit them if they are particularly relevant to the validity of the patent.

Attendance at the oral proceedings is not mandatory, but they will still take place even if one or all parties decide not to attend.

During oral proceedings, each party takes turns to submit oral arguments on the points raised during the written submissions, with the EPO Opposition Division playing the role of interrogator, devil’s advocate and chairperson of the proceedings.

At the end of the oral proceedings, the Opposition Division will issue a verbal decision on the validity of the patent in its granted or amended form.

A formal written decision is issued after the proceedings.

If none of the parties have requested oral proceedings, the EPO will provide a written decision based purely on the written submissions.

What are the possible outcomes of an opposition?

There are three possible outcomes:

How long does an opposition take?

The EPO is aiming to speed up the opposition procedure, with the total time needed for a decision in straightforward cases estimated at 15-18 months, calculated from the expiry of the 9-month opposition period.

A typical EPO patent opposition process looks like this: 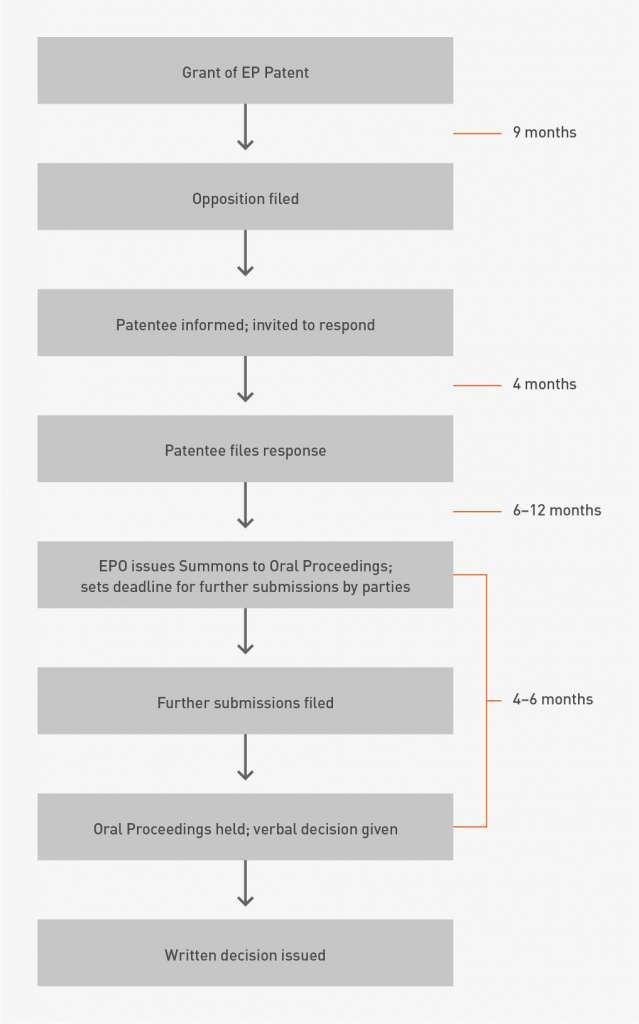 Appeal Procedure at the EPO

If one or more parties does not accept a decision of the EPO Opposition Division, then that party may file an appeal. Appeals are generally filed because a party disagrees with the outcome and believes the Opposition Division erred.

In some cases, for example when a patent has been limited but not revoked during opposition proceedings, all parties are not happy with the decision and all parties file an appeal.

When must an appeal be filed?

Within 2 months of the date of the written decision a party must file a Notice of Appeal and pay the official fee.

If no appeal is filed the decision of the EPO stands and that is the end of the proceedings before the EPO.

The official fee depends upon the entity filing the appeal. For (a) small and medium-sized enterprises, i.e. employing fewer than 250 persons and with an annual turnover no more than €50 million, and/or an annual balance sheet total no more than €43 million; (b) natural persons; or (c) non-profit organisations, universities or public research organisations, the cost is €1955. For any other entity, the official fee is €2705.

If the official fee is not paid, the appeal will be treated as if it had never been filed.

What happens after a Notice of Appeal has been filed?

If the Notice of Appeal is filed and the official fee paid, then there is a second deadline by which Grounds of Appeal must be filed. This is set at 4 months from the date of the written decision.

The Grounds of Appeal are the party’s substantive submissions.

If no Grounds of Appeal are filed by the deadline, then the appeal is treated as if it had never been filed, and the appeal fee is refunded.

What must be included in a party’s Grounds of Appeal?

The Grounds of Appeal should contain a party’s complete appeal case, should clearly set out why the decision should be reversed or amended, and should specify all the requests, facts, objections, arguments and evidence relied upon.

What processes are followed during an appeal?

As with the opposition procedure, once an appeal is filed, the other parties are informed and invited to respond to the arguments that have been put forward. A deadline of 4 months is usually set. Likewise, each party’s reply should also contain their complete appeal case.

When the EPO’s Board of Appeal has the submissions from all parties, and at least one of the parties has requested oral proceedings, the EPO will set a date and summon the parties to the oral proceedings. At the same time, the Board of Appeal may – but does not have to – provide a non-binding preliminary opinion on the issues. In many cases, however, the Board will summarise the issues to streamline proceedings and focus on key issues.

At the end of the oral proceedings, the Board of Appeal will issue a verbal decision on the validity of the patent, and a formal written decision will be issued after the proceedings.

In most cases, this signifies the end of all proceedings on the patent with no further appeal being possible.

If none of the parties request oral proceedings, the Board will provide a decision based on the written submissions. 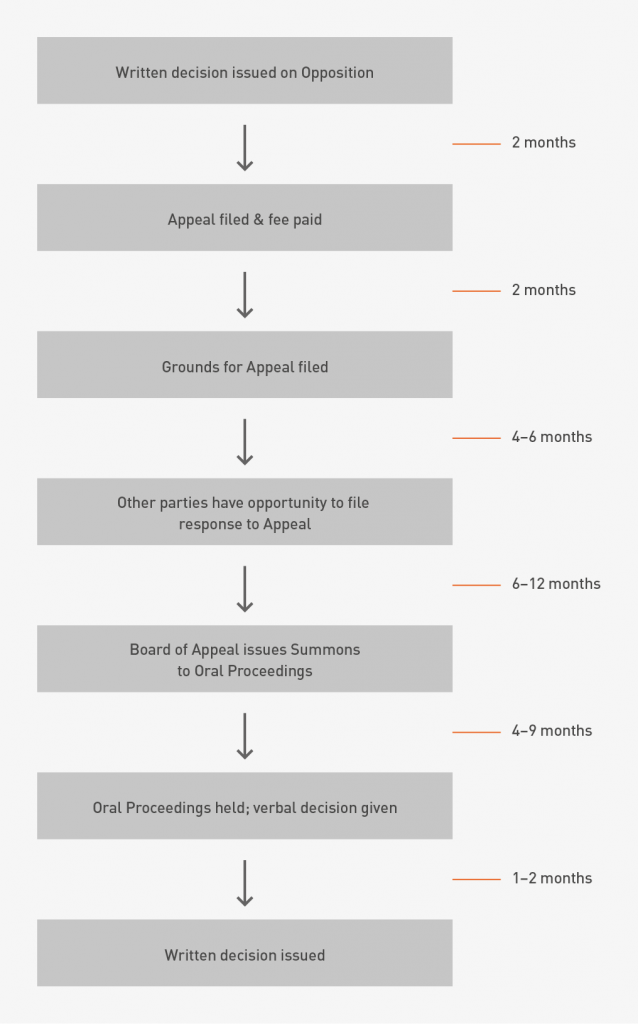 How can we help?

For further advice on European Patent oppositions and appeals or to discuss how we can assist you through this process, please get in touch to speak to one of our attorneys.

5 ways to spot an invention

Inventors and managers must be able to spot patentable inventions in order to protect future commercial success.

5 ways to accelerate grant of your UK patent

There are a number of options available for accelerating the application process to obtain a granted patent sooner.

How can the Patent Prosecution Highway help to accelerate grant of your patent applications?